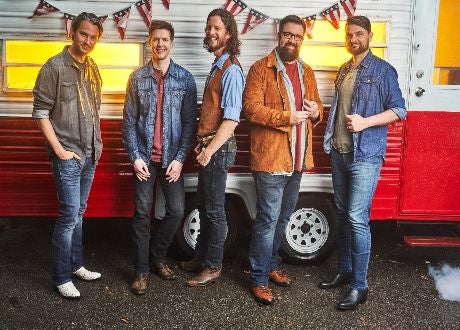 About Home Free: All-vocal Country entertainers Home Free have made their mark on the music scene, racking up nearly 600,000 album equivalents globally; embarking on major international tours; amassing 500+ MILLION views on YouTube; and being declared “Country music fans’ favorite a cappella group” (Taste of Country).The band will be bringing their new musicto Stockton California along with special guest Maggie Baugh.
The acclaimed group lit up the 2021 holiday season by hitting the road on their Warmest Winter Holiday Tour-showcasing songs off their most recent studio album, WARMEST WINTER (2020, Home Free Records), which features 12 festive staples, memorable collaborations, and Home Free originals – all guaranteed to get you in the holiday spirit.
This new project follows the acclaimed group’s DIVE BAR SAINTS album, which arrived at #2 on the Billboard Country Album Sales chart. Home Free’s extensive catalog spotlights six Top10 albums, including TIMELESS, FULL OF (EVEN MORE) CHEER, FULL OF CHEER, COUNTRYEVOLUTION, and their breakout debut CRAZY LIFE (2014). With praise rolling in from the likes of Billboard, Rolling Stone, FOX &amp; Friends, and American Songwriter. The extraordinary showmen have continued to build a loyal fanbase with their harmony-laden versions of hits by John Mayer, Blake Shelton, Keith Urban, Maren Morris, the Oak Ridge Boys, and more. Join us for a perfect evening of mixed of upbeat Nashville-dipped pop hits, country and western standards, incredible harmony and quick witted humor.
About Maggie Baugh: The career of this spitfire with the crazy addictive personality is movingat warm speed. not only has she reached one million + streams on Spotify with her viral hit “Think About Me,” she also finds herself standing alongside the likes of Luke Bryan and Trace Adkins, rocking out her fiddle in the music video for “Where the Country Girls At.” Add that to the fact that her new single “Drinking to the Broken Hearts’ instantly snagged the attention PEOPLE and CMT, and its quite evident that this talented soul is here to stay.
TICKETS$26.50, $33.50, $41.50, $51.50
Website