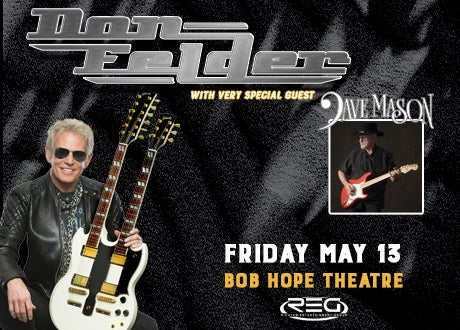 Don Felder with very special guest Dave Mason will play Bob Hope Theatre on Friday, May 13th. Tickets go on sale this Thursday, February 24that 10am through Ticketmaster.com
ABOUT DON FELDER:
Don Felderis a legendary singer-songwriter, a 1998 inductee into the Rock &amp; Roll Hall of Fame with the Eagles, a New York Times best-selling author, and a true American rock and roll guitar hero.Felder spent 27 years with the Eagles who own the fine distinction of recording the top-selling album of all time -Their Greatest Hits (1971-1975)- which has sold over 38 million copies (and counting).He co-wrote some of the band’s biggest hits, including “Hotel California” and “Victim of Love,” and became a New York Times Best Selling author with his autobiographyHeaven and Hell: My Life in The Eagles (1974-2001). His iconic double necked guitar was featured in theMetropolitan Museum of Art’sPlay it Loudexhibit in May 2019 – the first major exhibition in an art museum dedicated entirely to the iconic instruments of rock and roll – and is currently on displayin the Rock &amp; Roll Hall of Fame’s exhibit of the same name. He was inaugurated into the Musicians Hall of Fame and Museum in Nashville in 2016, and the Florida Artists Hall of Fame in 2017. His most recent solo albumAmerican Rock ‘N’ Roll(BMG) was released on April 5, 2019.

ABOUT DAVE MASON:
Dave Mason left Traffic in 1969 to pursue a solo career in the U.S. Dave has penned over 100 songs, has 3 gold albums: Alone Together, Dave Mason, Mariposa De Oro, and platinum album Let It Flow, which contained the top-ten single “We Just Disagree”.
In addition to cranking out hits, Dave has performed on, or contributed to, a number of famous albums, including: The Rolling Stones’ Beggars Banquet, George Harrison’s All Things Must Pass, Paul McCartney and Wings’ Venus and Mars, and Jimi Hendrix’s Electric Ladyland. Mason is featured playing acoustic guitar in “All Along the Watchtower” on Electric Ladyland, a favorite in Dave’s live shows! Dave, a prolific artist in his own right, has collaborated with an enviable list of the who’s who in the music industry … Jimi Hendrix, George Harrison, Paul McCartney, Stevie Wonder, Michael Jackson, Graham Nash, Stephen Stills, Rita Coolidge, Delaney &amp; Bonnie, Leon Russell, Ron Wood, Steve Winwood, Eric Clapton, and Jim Capaldi, just to name a few.

Please Note: To attend indoor events in the State of California, patrons 2 yrs. and older must provide proof of full vaccination, or a negative COVID-19 test result within 48 hours before event starts. Ages 18+ must provide valid I.D. with vaccination proof or negative COVID-19 test results. ALL unvaccinated persons must wear a mask and it is recommended vaccinated also mask up. This event and any scheduled event dates are subject to existing State of California, County and City Health Mandates regarding venue capacity and safety protocols for implementation of safety in response to the COVID-19 pandemic. The Stockton Arena reserves the right to cancel or postpone any event in conformance with any health mandate in effect on the date of an eve